A recent article on MLB.com ranked the top 10 farm systems (i.e., young minor league talent) in professional baseball, placing the Atlanta Braves in the top spot. Good news for Atlanta, which finished last in the National League East division in 2016. (Maybe not as good for the rest of the division, which includes the Mets and the Phillies.) But how important is developing and retaining young talent in a sport that doesn’t feature a salary cap anyway?

Well, since you didn’t ask, over the last four seasons, the Yankees and the Dodgers (the highest spending teams in the sport) have doled out more than $400 million combined per season, with no World Series appearances to show for it. On the contrary, teams with mid-range Opening Day payrolls have competed and won championships over the last few seasons. Thus, a new conventional wisdom for building a winning team in baseball has emerged: develop a core of young, affordable players you can build around and then supplement with veteran free agents, instead of the other way around.

Not every club has the bankroll to splurge on a roster of high-end talent, and teams have been increasingly reluctant to part with future stars via trade since, in the end, you pay a greater price for allowing budding stars to depart before they have fully bloomed. Also, there isn’t necessarily a correlation between dollars spent and success.

While money can act as the great equalizer, perhaps stopping teams avoid outright failure, spending it in greater quantities hasn’t been shown to – in and of itself – equate to current or future success. Contrarily, acquiring and developing the right talent is, and will continue to be, crucial for teams to succeed on the field and businesses in all sectors, beyond professional sports, to compete in the boardroom.

Like a highly rated minor-league prospect, an entry-level employee who shows potential in leadership competencies, for example, is a valuable asset to have, and worth developing. By building a strong pipeline of individuals who can step up and contribute as your veteran “free agents” move on or retire, you can ensure you retain key individuals in key roles, facilitate transmission of crucial institutional knowledge, and maintain efficient, highly functioning operations.

To build a pipeline, though, you need to understand the plumbing. Specifically, what are the competencies most closely correlated with success in the entry-level jobs you’re hiring for, and what are the competencies at the various levels of leadership in your organization? Using a scientifically validated assessment as part of your selection process, and doing the legwork through job analyses, will help you identify and understand what you’re looking for in an effective leader. Like showing up to Spring Training in shape and ready to go, it’s an essential element for success during the regular season.

In today’s business environment, with constant pressure to keep costs low, ensuring you keep your best and brightest on board and moving up through the system is, in business as in baseball, an effective tool to staying agile and efficient. And the key to that process lies in acquiring and developing the right future talent, with the right competencies, for your organization. 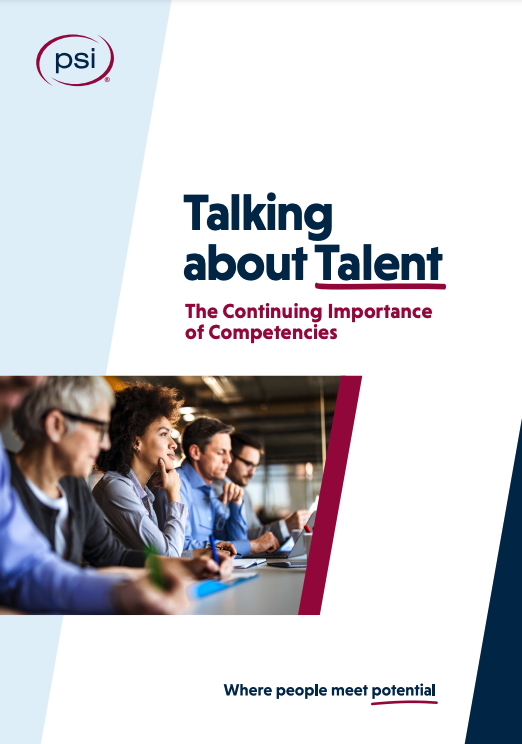 Talking About Talent: The Continuing Importance of Competencies

With the 2016 Rio Olympics fast approaching, top athletes from around the globe are vying for the final few spots available to represent their respective countries at the games. To make it this far, each contestant has had to take a single-minded approach to maximizing his or her personal performance potential and has pushed him...
Read More +

The Undeniable Qualities for Being a Team Player

“Teamwork makes the dream work.” Whether this was posted in the locker room when you were in high school or used in various sports movies, this catchphrase brought inspiration to teams. However, it’s not just for the locker room, it applies to the office as well. Being coachable and a team player around your workplace...
Read More +

As we approach the quarter pole of the 21st century, it has become apparent that the pace of technological change is not slowing down. Rather, we’ve come to expect disruptive, industry-altering innovation as the new norm. The impact of this economy on business and employment is twofold: Not only are people in task-focused jobs being...
Read More +